An Inspector Calls and Other Plays by J.B. Priestley
My rating: 2 of 5 stars

I recall seeing ‘An Inspector Calls’ in my youth. I couldn’t remember anything about it, truth be told, so when this text turned up in my son’s GCSE set texts for English I was delighted to be reacquainted with the play and dive into others of Priestley I didn’t know before.

As I increasingly find these days, doing so did not prove to be the joy I’d hoped for. Instead, yet again, I find another ‘well-known’ text which leaves me with a ‘what were we thinking’ feeling when I try to figure out why the work is so famous.

There’s no doubt that ‘An Inspector Calls’ is the best of the four in this volume – with ‘The Linden Tree’ a not-so-close second – but that really doesn’t say much. The plot is coherent at least (unlike ‘Time and the Conways’ which tries to be clever with a middle act set far in the future between two acts set in the same night but simply works out to be confused and pointless). The trouble is, the plot is also hackneyed, right down to the final twist-in-the-tale ending. Basic summary: an entire
well-to-do family destroy a girl’s life and don’t even know each other was involved. It’s been done countless times before and this one feels contrived.

Even more contrived is the attempt at going back in time to prevent the future in ‘I Have Been Here Before’. It’s cringeworthy, frankly. Half the problem is that Priestley attempts to extract deep philosophical meaning from his plays but really they’re very superficial. Deep meaning is essential to any story which is in some way sci-fi, as this is, because that’s the way to avoid being trashy. Tell us something about the human condition, then we can enjoy the fantasy. Priestley tries, but fails. The result is pulp fiction on display.

‘The Linden Tree’ is his best attempt at something meaningful. This, at least, has no convoluted timeline, no mystery element. It’s an old man refusing to give up his work and retire. There’s much to empathise with here; much to ponder over. We all face this one day: when do we stop? And what happens when we do? Except we never really get to the nub of it. Linden’s reasons for trying to stay on at the university are less than convincing. His dismissal of his wife is in complete contradiction to his treatment of her otherwise and simply doesn’t sit true. I waited for some key element to be revealed, but it never was.

In short, all these plays feel like…well, plays. There’s no sense of getting involved with the characters, considering their situation and applying that to ours, or simply ‘suspending disbelief’. Nothing feels real or convincing. What might have seemed clever to a young man 30 years ago now feels stale.

I don’t know who decided to include ‘An Inspector Calls’ in the current GCSE set list for English, but in doing so I’m not sure they’ve done the reputation of institutionalised learning in the UK much good. There’s so many superb plays out there – including from the 1940s as this play is – so there’s really no excuse to add a play which will surely make teenagers groan at the end in much the same way they groan at ‘dad’ jokes. For me, I truly hope my local theatre doesn’t decide to put on a production of anything by Priestley while I continue to review their productions. I do like to find at least something I can write which is positive. 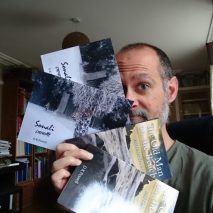 Social Entrepreneur, educationalist, bestselling author and journalist, D K Powell is the author of the bestselling collection of literary short stories “The Old Man on the Beach“. His first book, ‘Sonali’ is a photo-memoir journal of life in Bangladesh and has been highly praised by the Bangladeshi diaspora worldwide. Students learning the Bengali language have also valued the English/Bengali translations on every page. Ken has two new books coming out soon – don’t miss them!

Ken writes for a number of publications around the world as a freelancer and currently regularly reviews for Lancashire Life magazine.