The Bones of Grace by Tahmima Anam
My rating: 5 of 5 stars

I was long looking forward to Anam’s third book in this ‘trilogy’ but though I enjoyed the book from the beginning – she is a masterful storyteller, of that there is no doubt – I was, nonetheless, a little disappointed.

Firstly, the book really didn’t seem to be part of the trilogy at all. I could see no connection between this and her ‘A Golden Age‘ and ‘The Good Muslim‘.

Secondly, it felt very much as if this was a series of longer short stories masquerading as a single novel. One moment we’re involved in the love life of the main character and narrator, Zubaida. Then we’re on an adventure looking for the bones of a long dead whale. Then suddenly we’re ship-breaking on the beaches of Cox’s Bazaar, Bangladesh. Along the way we seem to randomly learn the story of Anwar – of whom I expected there to be an obvious sting in the tale, but it wasn’t to be. These all felt like good ideas which ran out of steam and were then discarded by the author.

Nevertheless, I loved the storytelling and Anam’s usual easy style which weaves you into the lives of the characters so gracefully. So I carried on, setting aside my hopes for the book in the wake of her first two excellent novels.

If, in reading this book, you feel the same disappointments then I must say: Keep going!

As the book neared the end, the threads pulled together and, instead of separate pictures roughly sown together as I expected, it turned out that everything made one larger picture – and that picture was beautiful.

For me, the test of a good novel is this: Do I care what happens to the characters in the future? Do I feel I don’t want the story to end? Anam’s book passes this test with flying colours. I was heartbroken when the story had to end and I have found it hard to extract myself from the lives of the players within ever since.

If truth be told, I would probably rate this 4.5 rather than a full 5/5 as it is not absolutely perfect. There are one or two messy bits, one or two parts which I didn’t feel tied up completely or added to the novel. But then, in one sense, that’s just what Anam is writing about here. An imperfect world, with imperfect people and imperfect love. Nothing has to add up completely to make a perfect sum.

Indeed, a refreshing change is the complete absence of genuine ‘bad guys’ in this story. There are less flawed characters and more flawed characters – each with their own good and bad points. This was especially true of the narrator herself who readily admits to being a coward and breaking the heart of Elijah, who deserved so much better (although he himself is flawed, revealing a selfish youth just a little at one point). While many novels today are taking the ‘flawed hero’ line, Anam’s book succeeds with me because usually I find myself unsympathetic to such characters, but not here. Zubaida’s plight and her thoughts and reactions I could understand and appreciate. She is not entirely unlike me, I thought throughout the story. Perhaps that is why I loved her so much.

In short, this is a beautiful book full of Bangladeshi life, full of the reality of what that means yet also so full of hope, peace and love. The enigma of Bangladesh is that it is both a beautiful place and a terrible one; born of a history which is both tragic and inspiring. Anam manages to capture this dual, split-personality of the country and people absolutely perfectly. For that, she demands my highest praise and my deepest thanks. 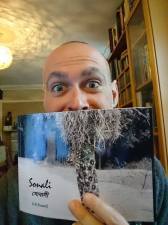 One thought on “Book Review: The Bones of Grace by Tahmima Anam”