The Alchemist by Paulo Coelho
My rating: 4 of 5 stars

This, arguably the most famous book of Coelho’s, is the second I’ve read of this author (the first being ‘Eleven Minutes‘). The novel is truly beautiful, simple and imbued with peace as seems to be the trademark of Coelho’s style. It deserves the fame it has received and is certainly a story which should be on anyone’s bucket list to read.

The story follows the life and fortunes of a young shepherd boy, Santiago, as he meets a variety of characters and learns to understand omens which lead him on his path of self-discovery and knowledge of the universe. I must confess to puzzlement as to why Coelho chose to call this book ‘The Alchemist’ when the story clearly belongs to the boy (possibly already the wisest of most of the characters right from the beginning) and the title character is merely one of several key figures who influence him. I waited for this character to have some extra special significance but failed to find it. Perhaps it was just me. I would have called it ‘The Shepherd Boy’.

I don’t know if I have a criticism so much as a comment to make about the general message of the book. I’ll give it anyway and leave it to you to decide if I am too critical or just.

Coelho is well known for his pithy statements and beautiful philosophy. Quotes from his books are turned into memes all over the world and millions turn to his stories for inspiration and hope. It’s not hard to see why here. ‘The Alchemist’ teaches that everyone should seek out their own ‘personal legend’ and that the universe conspires to help those that do. It’s a dangerous thought though and one I fear can lead to terrible disappointment.

In the back of mind I feel a little like Coelho is being like a gypsy travelling salesman selling bottles of hair restorer and longevity from the back of his caravan to the gullible and unwary. He peddles hope and love and has made a fortune from doing so. But such is the peace and tranquility of the book that I feel this is an unfair simile to use. These are not the words of a con artist.

So instead I’ll liken the novel to doing a jigsaw puzzle. You know the sort – the photo of a house and beautiful car on a lawn with gorgeous rose bushes to the side and a wonderful warm blue sky stretching across the top of the puzzle. Coelho’s book is entirely sky – indeed it is very much ‘blue sky thinking’ (or ‘blue hat’ as de Bono would say) and it is all but cloudless. It is beautiful but a jigsaw puzzle composed entirely of sky is difficult, lacks interest and ultimately is untrue. It needs the car, the green field, the red roses and the house to give it a purpose and a context. So with Coelho’s book. This isn’t the whole story.

Coelho’s novel doesn’t peddle false hope to the naive. But his message needs a context. He is a good antidote to the bitterness and cynicism of the likes of Ayn Rand et al but you still need such hard writers to fix hope to a reality. At a time when so many of us just need something nice in our lives, he provides words which are as warming to the soul as a cup of tea is refreshing to the body. But too much sweetness leads to an intolerance of sugar and the result is a blander more insipid world. In such a case, it would have been better not to have tasted it at all.

Read Coelho then at your own risk! ‘The Alchemist’ is truly sumptuous and almost certainly a book I will want to read again. But it is best read as a pick-me-up – when life is weighing you down and you really don’t believe there’s any goodness left in the world. Be refreshed, then go read something else which perhaps will remind you that sometimes the universe is a changeable beast, blessing one as it punishes another and that not everyone’s ‘personal legend’ is a good and honourable thing – or even achievable. 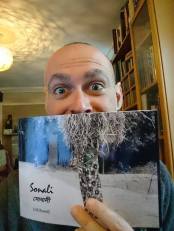