Talking Heads by Alan Bennett
My rating: 5 of 5 stars

I’m late to the Alan Bennett fan club, I’ll admit. I’m also not ashamed to say that a more urgent interest in him has directly arisen from watching the film “The Lady in the Van” which I thought was brilliant and deeply poignant.

I remember the ‘Talking Heads’ series running in the 80s and, although they didn’t interest me as a young lad at the time, I recall that they were held in high regard. As a grown-up, I know that high regard of others has never receded and it has been my intention for a long time to read the collection of monologues. After watching the aforementioned movie, that intention moved up a gear. It was probably helped along by the fact that all the bookshops I went into were majorly publicising his books off the back of the success of the film too!

If I could rate books here in half stars I would knock my five stars down to 4.5 simply for the very first story – “A Woman of no importance” – as it was easily the least effective of all of them. But then, technically, it’s not one of the ‘Talking Heads’ series anyway but a standalone which inspired the rest. In a way, important though it is, it’s a shame it is there I think. The first story is how I would have written it – and is dull as a result.

By contrast, the rest of the stories are superb, deep and, in some cases, tremendously brave. ‘Playing Sandwiches’ is one that comes to mind in the last category. I can’t decide if a story like that could be broadcast today or if it was astonishing it was broadcasted then. Either way, it is a disturbing idea – yet it works.

The secret, I think, to Bennett’s success is that he writes so mundanely ‘normal’ that the subject matter and climaxes hit you harder. These are no Hollywood heroes or villains here. They are you, and me, your neighbour, the old lady who walks her dog past your house, the traffic warden who puts the ticket on your car window. There is no good and bad as such here. There’s ordinary lives with climaxes to these mini-stories which are just as ordinary but never boring.

That’s what makes Bennett so enduring. His skill at making the mundane interesting, sympathetic, witty and kind – it’s something I’m truly jealous of. You can try to analyse how he does it and won’t find the key (believe me, I’ve tried). Bennett just has that gift from the gods.

Is it an overstatement to call ‘Talking Heads’ a masterpiece? No, I don’t think so. It is books like this which need to find their way onto the school reading lists for A levels and so on while removing the outdated and overblown ‘classics’ from Hardy et al. Bennett says something important to all of us (those of us living in the UK anyway) and I am firm in the opinion that the sooner he is introduced to young adult minds the better. I can’t say how much I regret not watching the series back when that was me. I know I would have been a wiser and kinder person if I had. 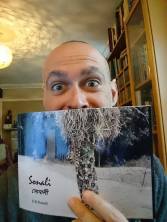 Writer and journalist D K Powell is the author of the bestselling collection of literary short stories “The Old Man on the Beach“. His first book, ‘Sonali’ is a photo-memoir journal of life in Bangladesh and has been highly praised by the Bangladeshi diaspora worldwide. Students learning the Bengali language have also valued the English/Bengali translations on every page. Ken has two new books coming out over summer – don’t miss them!